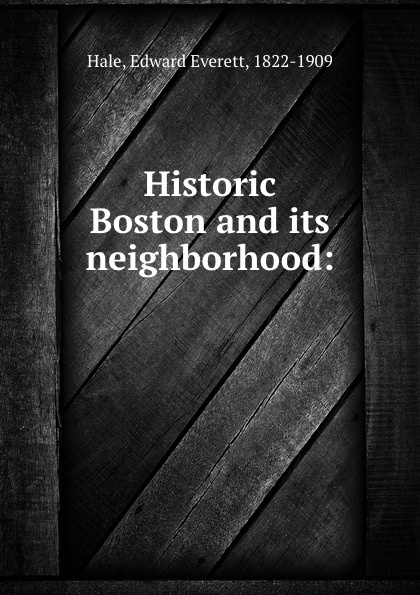 Edward Everett Hale (, – , ) was an American author and Unitarian clergyman.

Hale was born on , , [Nelson, Randy F. "The Almanac of American Letters". Los Altos, California: William Kaufmann, Inc., 1981: 41. ISBN 086576008X] in , the son of Nathan Hale (1784-1863), proprietor and editor of the "Boston Daily Advertiser", and the brother of . Edward Hale was the nephew of , the orator and statesman, while his father was the nephew of the who was executed by the British for espionage during the Revolutionary War.

Edward Hale graduated from Harvard in 1839; was pastor of the Church of the Unity, , in 1846-1856, and of the South Congregational (Unitarian) church, Boston, in 1856-1899. In 1903 he became chaplain of the United States Senate. Hale married Emily Baldwin Perkins in 1852—she was the niece of Connecticut Governor & US Senator and Baldwin on her father's side and and on her mother's side. They had eight children; one of his grandsons was the actor . Hale died in Roxbury, by then part of Boston, in 1909.

Combining a forceful personality, organizing genius, and liberal practical , Hale was active in raising the tone of American life for half a century. He had a deep interest in the anti- movement (especially in ), as well as popular education (especially s), and the working-man's home. He was a constant and voluminous contributor to newspapers and magazines. He was an assistant editor of the "Boston Daily Advertiser" and edited the "Christian Examiner, Old and New" (which he assisted in founding in 1869 and which merged with "" in 1875), "Lend a Hand" (which he founded in 1886 and which merged with the "Charities Review" in 1897), and the "Lend a Hand Record". He was the author or editor of more than sixty books—fiction, travel, sermons, biography and history.Hale first came to notice as a writer in 1859, when he contributed the short story "My Double and How He Undid Me" to the "". He soon published other stories in the same periodical. The best known of these was "" (1863), which did much to strengthen the Union cause in the North, and in which, as in some of his other non-romantic tales, he employed a minute realism which led his readers to suppose the narrative a record of fact. These two stories and such others as "The Rag-Man and the Rag-Woman" and "The Skeleton in the Closet," gave him a prominent position among short-story writers of 19th century America. His short story "", serialized in the "Atlantic Monthly", is the first known fictional description of an artificial .

The story "Ten Times One is Ten" (1870), with its hero Harry Wadsworth, contained the motto, first enunciated in 1869 in his lectures: "Look up and not down, look forward and not back, look out and not in, and lend a hand." This motto was the basis for the formation of Lend-a-Hand Clubs, Look-up Legions and Harry Wadsworth Clubs for young people. Out of the romantic Waldensian story "In His Name" (1873) there similarly grew several other organizations for religious work, such as King's Daughters, and King's Sons.